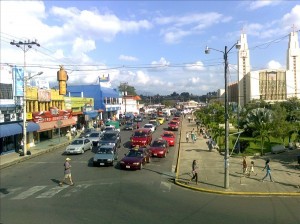 San Isidro de El General, Perez Zeledon, is a city with a population of 45.000 people, situated in the south of Costa Rica at the foot of Chirripo Peak, the highest mountain in Costa Rica. This city is part of the Brunca region, that along with the Chorotega region has the highest levels of poverty in the country. Like many cities, San Isidro was strongly affected by the economic changes of the 80s. These changes could especially be recognized in the rural areas with the installation of large businesses that were responsible for the selling of land by the campesinos, and their concentration in marginal neighborhoods in the outskirts of San Isidro.

In consequence, social problems such as domestic violence and drug-use intensified; school desertion rose because of loss of perspective in youth. The lack of infrastructure and the difficult social-economic conditions in these areas offered no creative use of free time. Some of the areas best known with these problems are Cocori, Tierra Prometida, Pavones and Los Chiles.