In 2002, Gerhard Puercher began to work socially in different districts of San Isidro while doing his civil service in Costa Rica. He initiated the youth in the basics of juggling, acrobatics and theater. His offer got a very enthusiastic feed-back from the youth. This motivated the next volunteers to follow and develop his project: they built several groups, prepared different shows, and celebrated the first success as “Circo FantazzTico”. 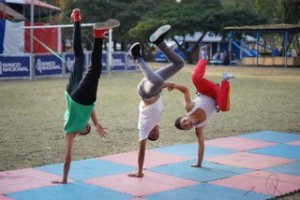 In 2006, a group of youth, specially motivated and advanced in circus arts, was formed for further challenges. Thanks to the engagement of foreign volunteers, the level of the group rose so that they came to the idea to do a tout in Europe. This trip was only possible thanks to numerous donations and great volunteer work. This tour lasted 3 weeks from July 2007 on, in Austria, Germany and France.
The second international success of the “Circo FantazzTico” was the Tour 2008 in Central America, which occurred from Costa Rica until Mexico, from October to December 2008. That allowed the youths not only to develop their technical skills, but to take advantage of numerous experiences and to become intercultural and interpersonal competences. With the European Tours 2009 and 2010 even more kids could get this huge experience of seeing a region of the world so different from their home and the Circo FantazzTico became more popular in central Europe. 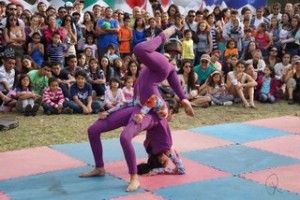 Circo FantazzTico goes on favoring the exchange between this advanced group and the other youth in order to allow them the same achievement. Moreover, professionals are invited as well to propose advanced training and intensive workshops are organized in order to go on improving the level of the whole.

The beginning of a long adventure… see above!

– Tournee in central-america and Mexico